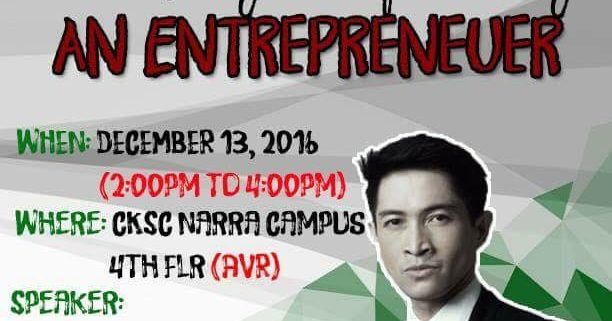 On December 13, 2016, American Institute for English Proficiency co-founder, Paulo Valentino Magbuhos, or Vin as he is commonly called at AIEP, was invited by Chiang Kai Shek College to present to the business administration students the topic, “Challenges of being an Entrepreneur.” In his presentation, Vin discussed capital and how and where to get the initial capital or funding when starting a business. Next, he talked about “agents,” the people who could help fuel one’s entrpreneurial success. These agents are your business partners, mentors, employees, and customers. Finally, he discussed the importance of having a niche, a product or service that differentiates you from the rest of the competition.

Vin co-founded AIEP, which opened its doors on January 21, 2007, with branches in Makati and Quezon City. Vin believes that “the bigger the risk, the bigger the return.” As a seasoned entrepreneur, Vin has faced numerous challenges, but has overcome many of them as AIEP is about to celebrate its 10th anniversary.