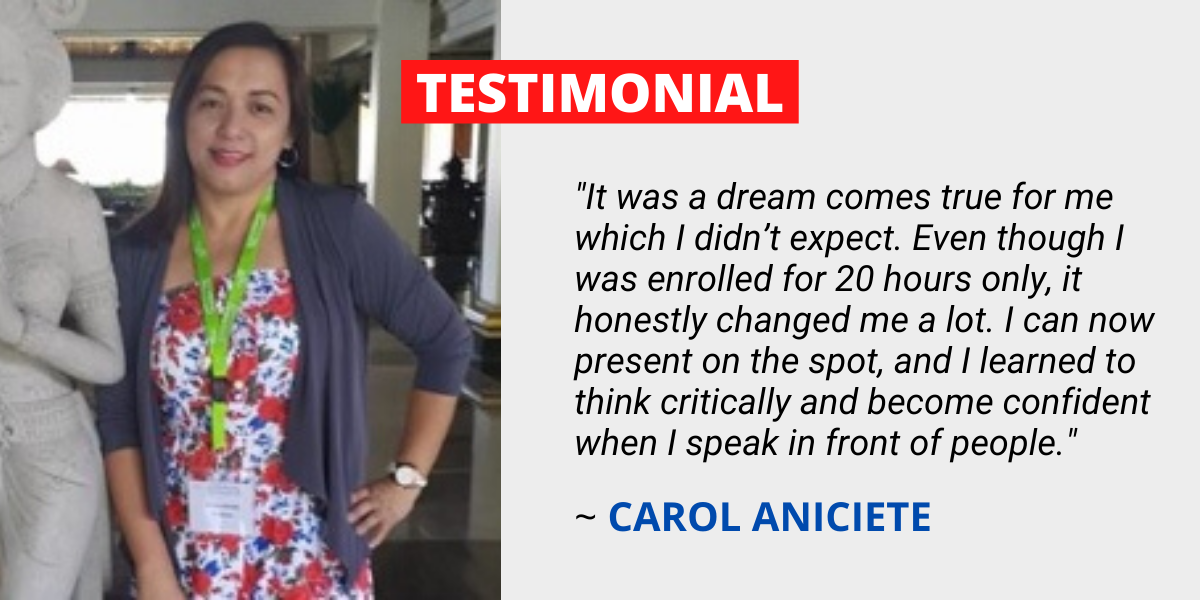 I grew up in a poor family; both my mother and father stopped school at the elementary level. I grew up in a scary community where you could hear the cat calls of the “kanto boys” almost everyday. Growing up, when I hear someone speaking English, I told myself they either belong to a rich family or just have too much pride. I didn’t know that one day, it would become my weakness.

In college and when I already began working, English became a necessity. I remember how insecure and inferior I felt in those days when asked to speak in English, when I was working, and I needed to speak with my colleagues during conferences. It was such a memorable experiences because I almost collapsed and felt stomach ache, and was about to cry. When I got promoted from to territory manager and to district sales manager, I knew that it would be my problem again because it is part of my job to talk while my boss and subordinates listen either in a meeting, conferences, and lectures. The worst scenarios was when I delivered the opening remarks at workshops and conventions with the customers.

This year, my manager offered me a financial assistance to study English and public speaking at the American Institute for English Proficiency (AIEP) in Quezon City, where he knew Chris, the co-founder of AIEP since he used to attend PSG or Public Speaking and Grammar class three years ago. I was very excited when I first visited AIEP and met my classmates from different countries; I also met the Specialists: Reggie, Jay, and Liz.

It was a dream comes true for me which I didn’t expect. Even though I was enrolled for 20 hours only, it honestly changed me a lot. I can now present on the spot, and I learned to think critically and become confident when I speak in front of people.

I really thank my manager for giving me an opportunity to study in this prestigious institution as I conquered my fear of speaking in English with a high confidence level. Thank you AIEP-QC as these experiences contributed to my new perception in life that being a good speaker is not only the language for the rich and “social.” The experience at your school made me realize that I must continuously improve my personality and my English and communication skills. I am forever grateful.

Holiday Hours at the American Institute for English Proficiency