Blog
You are here: Home1 / Blog2 / Blog3 / THEATER IMPROVES YOUR SENSE OF CULTURE AND THE ARTS

All over the world, people love entertainment.  There are several forms of entertainment that people enjoy: music concerts, talent shows, dance performances, theater and acting, and cultural shows among others.  Like most people, I am also appreciative of arts and entertainment.  One the most popular entertainment is theater: movies, live theater plays, musicals, and operas.  Most people are visual-emotional.  This means, their emotions respond quickly to what they visually perceive.  When an adult sees a baby cry, he or she automatically feels worried; when a person sees dirt and trash all over the streets, one immediately feels disgusted.  This is the same when anyone watches a play or a movie. When the theater curtains are drawn back, it reveals a reflection of people’s lives, situations, and conflicts.  In a sense the audience can relate to the story of what is happening on stage or in the silver screen.  There is a magnitude of emotions running through a person’s senses.  It is unavoidable that people will emotionally respond to scenes, but they must also be conscious of the value they would learn from these plays or movies.

My favorite German poet and playwright, Friedrich Schiller, said in his lecture, Theater Considered as a Moral Institute, “In the theater’s fearsome mirror, the vices are shown to be as loathsome as virtue is lovely.” As members of the audience, we must not only respond to our emotions and senses.  We must also think about how circumstances, shown in the theater, reflect what is going on in our society: politics, religion, education, pop culture, fashion, economy.  I have always believed that the audience must be better people when they leave the theater than when they enter it  They have a peek of the truth of what is happening around them.  The theater must allow people to realize for themselves of what they can conclude as a value.  In other words, people must be exalted, rather than degraded from watching plays and movies.

Entertainment can be fun, but, more importantly, it should be educational.  The English specialists at the American Institute for English Proficiency are also fond of theater.  In fact, some of us have been stage actors and have participated in theater productions as actors since high school.  Theater has helped us become more confident and more expressive when it comes to speaking English.  Join the AIEP specialists in a theater, and discuss ideas from it afterwards. 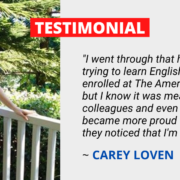 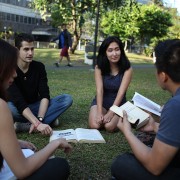 IMPROVE YOUR ENGLISH THROUGH CULTURE AND LIFESTYLE